home . Media . What if the data worked for us instead of against us? – Imagining feminist resilience and resistance in datafied societies in the African context. 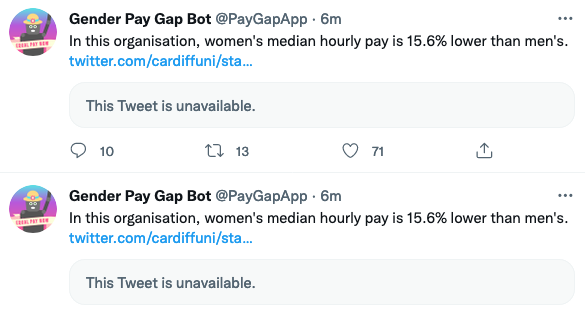 What if the data worked for us instead of against us? – Imagining feminist resilience and resistance in datafied societies in the African context.

The narrative around privacy and data protection, in particular from a gender and sexuality standpoint, is that of continued digital exclusion, inequality, dataveillance, privacy breaches, and injustice from extractive data practices. But what if we prioritised imagining new narratives that place emphasis on collective action, community response, use of data, and agency in privacy and data protection discourse?

On Tuesday the 8th of March, International Women’s Day, social media communities across the world woke up to the activism of the @PayGapApp, using public data, affirming the need to imagine  resistance and resilience in datafied societies to address gender-based injustices.

In  previous work, I focused on how regulation and policies around data protection and privacy are shortcoming in addressing gender-related data concerns and harms. These concerns and harms play out in the context of existing inequality shaped by patriarchal norms and practices affecting individuals and communities. They impact privacy through increased surveillance, access to economic and social opportunities through discrimination and bias in algorithms, and safety through technology assisted gender-based violence. It is important for the law to be gender responsive, but while we wait for the law to catch up, how do we work towards movement building and collective action to exercise agency over harmful data practices and ensure privacy in the online realm?

This is where collective feminist thinking  comes in. I am working on a project focused on Zimbabwe, South Africa, Malawi, and/ Zambia. The purpose of the project is co-create the ways  feminists may resist and be resilient against data practices as we navigate the online space through support from the ADAPT project by Internews.  This builds on work that has reviewed data and gender in the SADC region and also is part of my positionality as a feminist from Southern Africa who works on digital rights issues. The research focuses on feminists because they are aware of patriarchal structures that influence context; nuances of power and are reflective of their positionality. It is also important to have self-identified feminists who would be able to become part of movement building for digital resilience.

The project is guided by feminist thinking and practice in the design of the research. It will draw from feminist approaches to knowledge building  that would allow for co-creation of knowledge and bring value to multiple ways of knowing.

We are using multiple tools to build evidence to inform the research. To begin with, a workshop will be hosted on the 18th of ‘March targeted towards African feminists to unpack the connections between gender, privacy, and data.

A survey will run from the 18th of March till the 20th of April to understand the general understanding by African feminists on the connection between, privacy, gender, and data. A group of identified feminists from the mentioned countries will participate in a digital qualitative study documenting data experiences and stories and collectively thinking through what resistance and resilience would look like in response to their data experiences. All of these activities will assist in developing the guide for feminist resistance and resilience to be captured in a final research report.

I am excited about this work! I am excited to be working with feminists who have different interactions with data but have used the internet and digital tools. At the end of it all, I hope to have collectively created ways of resistance and resilience towards the collection and processing of data in datafied societies. Furthermore, I hope that in the solutions, we can see the agency of often excluded groups to make use of technology and data to respond to injustices.

A feminist approach to assessing AI, privacy and data protection in South Africa

What if the data worked for us instead of against us? – Imagining feminist resilience and resistance in datafied societies in the African context.